Not a clever title, but that's not what's important, right? Right now I'm tired after spending an hour at the pool doing my exercises. 3 days this week! Sky is looking clearer but my headache is threatening to come back. Crazy sinuses.

Following the purple fairy down a path that branches off to the rght, Larkin begins to see flashes of white and rainbow colors. As the mists part in front of them, she sees two adult unicorns standing guard over a meadow full of baby unicorns. "Hi Una and Berry" the fairy says, addressing the unicorns. "Hello Tiny. Who is this little Princess?" the pink unicon asks. "This is my friend, Larkin, and she would love to get a close look at the babies. She's a good girl and won't harm them." Una and Berry circle Tiny and Larkin, sniffing Larkin's scent. Nervously, Larkin says, "I promise I won't get too near. I love unicorns and don't want to hurt any. I won't even try to pet one, unless you say it's okay." Una made a sound that was between a neigh and a giggle and Berry spoke up. "We can tell you are a good little princess but are you ready to be surrounded by a bunch of playful babies?" "Oh yes!" "I warn you," Berry continued, "they will all be running up to you , nudging you, wanting to see if you have any treats for them and wanting to be petted." Larkin frowns and says, "I'm sorry, I didn't think to bring any treats. I don't even know what baby unicorns may have." Una and Berry tell her not to worry because the babies have just been fed a short while ago. And into the meadow they go. Larkin is surprised that all the babies in this group are white with rainbow manes and tails. As the little ones nudge her with their noses and she gets the okay to pet them, Una explains that as the babies grow, they will begin to change their colors, gradually having the colors of their adult lives. 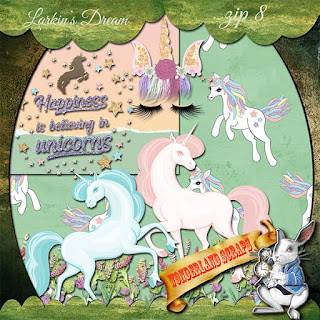 *** Waving at Kristy - How is your Mother doing? She is in my prayers
Posted by SherryD at 5:57 PM