Ever heard of Memphis Design? A new freebie

When I hear "Memphis" I think of Memphis, TN, country and rock 'n roll music. So a few months back when I started receiving free design resources from companies I'd used in the past and they were labeled "Memphis Design" or some variation, I looked at the largely abtract, geometric designs in bright colors and wondered what it was all about. I began looking around the web for information on so called Memphis Design and here is what I learned.

[Apologies but I can't read the sources of this info that I jotted down in a hurry.] "It's December of 1980 and an architect/designer called Ettore Sottsass rallies his group of creative friends for a meeting. . . . let's take everything people consider "wrong" in design and make a badass movement that celebrates unrestricted creative exploration. Let's rebel against the uniform, slick, minimalist aesthetic of the 70s and stand for something radical instead. Memphis and the Sottsass Association group were born."
At its core, Memphis was drawing inspiration from a few existing design movements, which you'll spot throughout:
Art Deco: in its appreciation of striking geometric figures
Pop Art: evident in their use of bold color palettes
1950’s Kitsch: a total departure from the constrained, minimalist design of the 70s.
The movement became so influential that the Wall Street Journal recently reported a resurgence of a certain "neo-Memphis" aesthetic, claiming that "for many postmillennial designers around the globe, Memphis is a major source of inspiration". In this new wave, however, designers are opting for higher quality materials like metals and marble instead of plastic. . . .
Rebellious and daring, Memphis has been called all sorts of things. SFGate recently called it "a shotgun wedding between Bauhaus and Fisher-Price" — which, to be honest, isn't too far from reality. Using 80s pop culture references, Gizmodo also described Memphis as "Pee-Wee's Playhouse meets Miami Vice. It's Saved By The Bell plus Beetlejuice."


In short, we can say there are three components that make up Memphis Design
1. Typography: You want to choose fonts that complement this style's geometric feel. Art Deco inspired fonts are perfect picks, since they capture both the sharp edges and smooth curves that characterize geometric shapes. They are also reminiscent of a time that also inspired Memphis group founders.
2. Patterns: Here's where it can get a bit tricky. Unlike previous design movements, Memphis embraced a somewhat chaotic, free-spirited approach to backgrounds. It isn't uncommon to spot thin, straight lines in stark contrast with organic, free-flowing dots and structured 3D shapes. Thinking about toys and play definitely helps.
3. Color: You don't want understated tones. Look for color palettes that bring dynamism and joy, without necessarily following the rules of "what's right". Memphis founders didn't care either.

With the above information in mind, I decided I'd make use of the materials sent to me and create a kit for you that should work for any 1980s photos you might have lying around. I chose this as my color scheme: 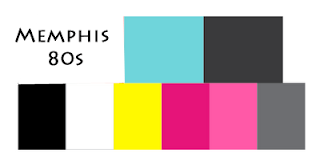 I've finished the kit, Memphis 80s, so tried to put together an overall preview for you. 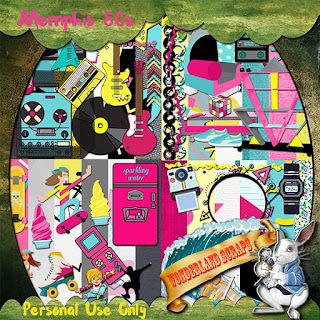 It's cluttered and not a whole lot of use. at least I don't think so. So I tried some other previews:
Here's one with just the 24 papers: 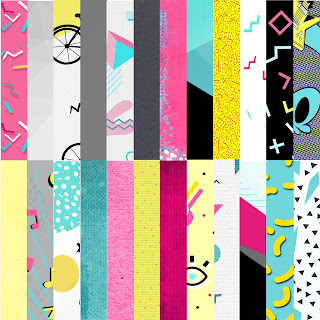 And one with just elements: 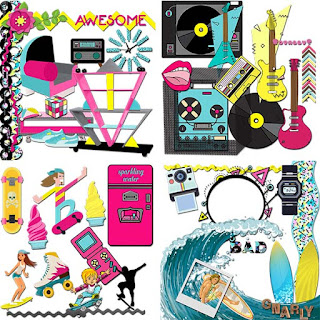 Of course, you will also get individual previews for each zip. Note too that since this kit was finished before I began posting, you can save just one copy of TOU and credits.

Today 2 papers and some examples of Memphis furnishings: 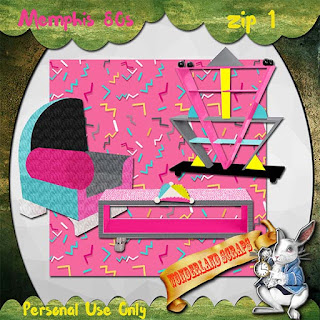 Oh my goodness, Sherry! Your dedication to research for your designs is amazing. The Memphis 80's kit looks like another winner. Thank you.