Spent yesterday being lazy - catching up on sleep and stretching out aches & pains from long sitting. Ordered a vintage decorative celluloid panel that I plan to use on the cover of a needle & pin book for my chatelaine. Bidding on a carved needle case too. Looking for some bone or celluloid chain pieces to add for other tools. Haven't done much today either but plan to do some chores after this post. Today we have some more elements with a little purple: 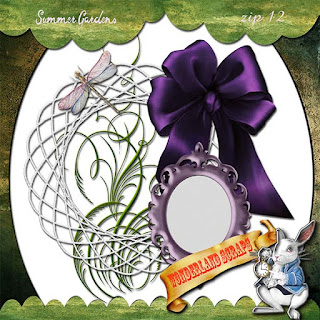 Thought I had scheduled post for Thursday as I knew I'd be out of town. Went on a day trip to New Jersey for - are you ready? - groceries we can't find in Virginia. That is, stuff my husband grew up with in New York. Most of it doesn't interest me. I went along for the ride. Ugh - a 15 hour trip. Worn out when we got home so didn't check computer things. Anyway, here is belated zip 11, added elements for yellow stash. 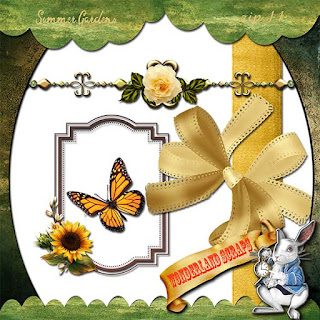 Hope you are tired of flowers, because there are more zips coming. Today I'll be out to lunch with my retirees group & we will be eating at Smokey Bones. For the next few zips of the freebie I'll be giving you some elements that didn't end up in earlier zips and following up with some quick pages - one for each of the original zips. Here is today's: 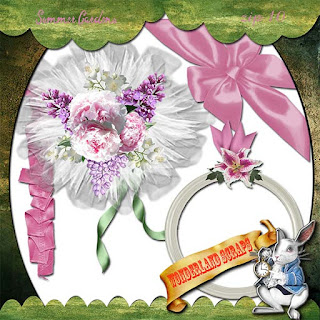 Went thrift store shopping earlier in the week. First time in ages. Didn't find much at the one store I stopped in, just a couple cute cream pitchers. Plan to turn them into pincushions. Have been wasting time on internet looking for mother of pearl sewing accessories at prices I can afford. Vintage sewing tools are very collectible and pricey. Have bids in on a couple items, including an antique Chinese needleholder of carved bone which would go on my vintage bone/celluloid (sometimes hard to tell which) chatelaine. I rescued it at an antique fair in Richmond while I was in grad school. It was in bad shape and I don't think anyone gave it more than a glance or had any idea what it was. The vendor sure didn't. Wish I had taken a photo of it before I started refurbishing. When I found it, it was just a medium (4") "finger" ring with 3 "chains" attached by rapidly disintegrating red silk ribbon. The outer two chains were of bone rings woven together, one with a bodkin attached, the other with an awl. The middle chain was of fancy cut pieces. The closest pictures I can find of what it would have looked like in good condition are these and mine was configured differently. Still it will give you some idea of what the ribbon woven chains were like. These are all examples of sewing chatelaines ordinary people might have owned in the 1920s - 1940s and perhaps even later in places like Shaker communities. Later I'll tell and show you what I did with my salvaged chatelaine pieces. 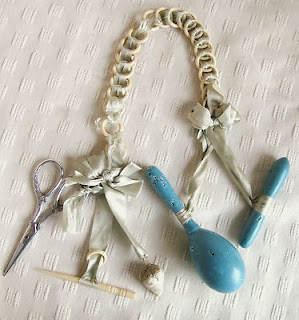 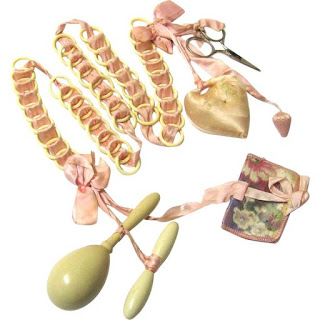 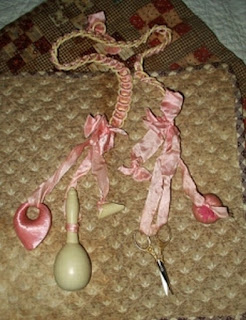 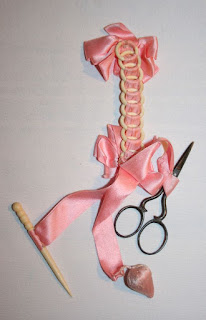 With all the steampunk stuff we have been seeing in recent years, you might have the idea that chatelaines were just a Victorian thing but they date back further in history and are still in use in places around the world today. Whatever the time period, the chatelaine was a way to gather and carry along useful items. In the original French, the word meant keeper of a castle and later, the woman in charge of a large house. Today it means:
A chatelaine is a decorative belt hook or clasp worn at the waist with a series of chains suspended from it. Each chain is mounted with useful household appendages such as scissors, thimbles, watches, keys, vinaigrette, and household seals. Wikipedia. There are chatelaines with a mix of item categories and chatelaines devoted to a pqrticular type of item, such as the sewing chatelaines I talked about above. I find them fascinating and can spend hours looking at the various kinds.


But for now, Let us get back to our ongoing digital series, Summer Gardens 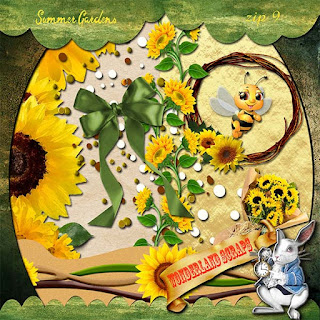 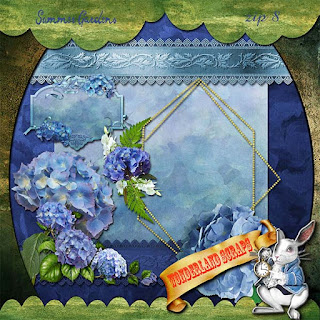 Managed to get a few things done yesterday, including going through the medicine cabinet to throw out anything that was expired or not being used. Today I'll go through the vanity drawers and under the sink because tomorrow is trash day. Going to get some of the stuff that accumulates out of here. Finished up the day with dinner at Outback, then came home and rested up with a sinus headache.

Wondering if any of you like to sew or quilt? Didn't get around to telling you that when I was in Georgia, my friend gave me an antique sewing travel set. The handles of the implements are mother of pearl, which she knows I love. We talked a lot about getting back into doing crazy quilting. If you aren't familar with it, check this out:
https://en.wikipedia.org/wiki/Crazy_quilting
My friend's new house has a French feel to it and she has decorated to accent that. She's always loved Joan of Arc and Marie Antoinette (not that the two are related in any way other than being French). I sent her a new historical novel about St. Joan as part of a thank you gift for my visit. And I am designing a crazy quilt piece about Marie Antoinette. All the talk about stitching has me eager to get back into it. I've also been coming across lots of photos of sewing chatelaines. Just love those although most are well beyond my budget.

But you are here about Summer Gardens, aren't you? Today we go from peonies to another fragrant flower - lilacs. 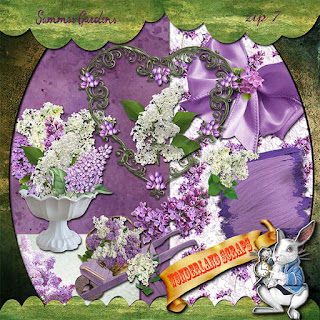 Thursday's breathing test found me at 70% lung capacity which was good. Didn't get to Outback for dinner because husband hurt his hand such that a finger felt broken. It's not just an old injury acting up. Doing better today. I didn't do much yesterday but sit at computer and work on this kit and do a load of laundry. After I post, I'll change into work clothes and try to get some cleaning done. Still having to pace myself. 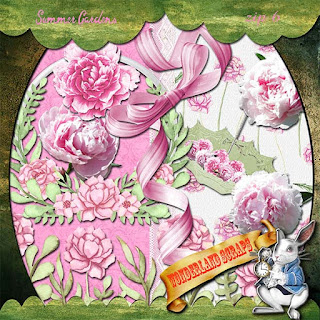 I'll be heading out to pulmonologist shortly. Time for re-check on bronchitis and a breathing test to see how it hs effected my lung capacity. Later, dinner out.

Today our Summer Garden has lots of forget-me-nots, a sentimental favorite: 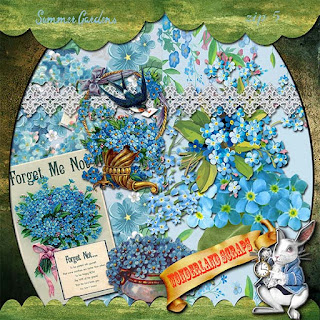 Thank you for lovely comments. Glad you are enjoying this series. Here is your next zip, featuring one of my DIL favorite flowers, the Stargazer Lilly. 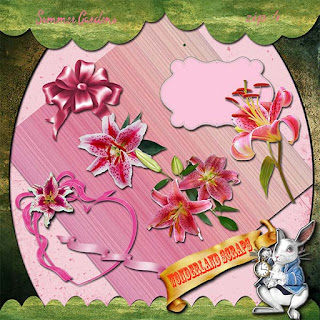 Hurricane season has begun and for Tidewater, it means we are having thunderstorms most every afternoon or evening. Still, compared to so many areas of the country, we know we are very lucky, 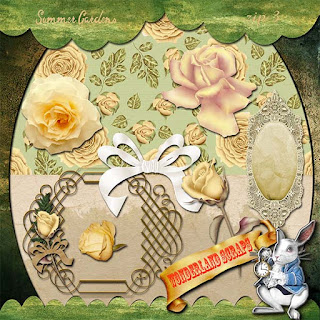 Happy Birthday to grand-daughter, Larkin, who is nine today! Will be taking her to see Aladdin on Sundy. 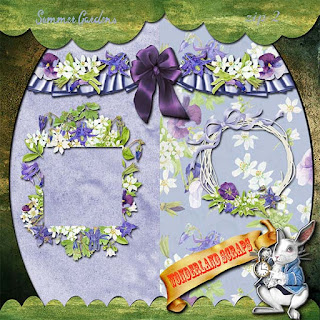 And I'm off to buy some Shopkins for Larkin.
Posted by SherryD at 12:52 PM 1 comment:

My problem with PC wasn't PS. Re-installed and everything (not just PS) still extremely slow. Checked registry for anything that might have gotten added and only found one item. Removing it didn't help. Updated my Vipre and suddenly things seem better. Fingers crossed.

Starting today we are going to look at summer flowers. At first, I'd thought about calling it Summer Blues and sticking to just blue flowers with a little white. Not enough there. So it is Summer Gardens. The first zip features irises, something both my mother and my aunt always grew. 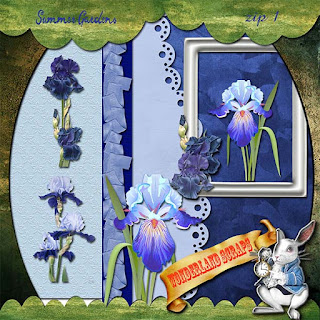 May not get the first zip of Summer Gardens up today because my Photoshop is giving me problems. Going to have to uninstall and reinstall.
Posted by SherryD at 6:10 PM No comments:

If you watch national news, you would have seen that yesterday in Tidewater, Virginia - Virginia Beach, to be exact - there was a mass shooting. Right now there is some controversy because details about the shooter were held back for a good while and now it turns out that the shooter was a middle-aged Black male employee. The controversy? If the shooter had been of any other "race" the FBI would have immediately searched his home, computer records and so on. This, according to the below referrenced article:
https://rightoftheright.com/media-disappointed-that-virginia-beach-mass-murderer-is-black-and-used-a-handgun/
Now I don't subscribe to the idea of "race" but see it from a Sociological perspective as a social construct whihc has done more harm than good. However, I do have a problem with any differing treatment by law enforcement because of so called race and worries about racial profiling. Shouldn't everyone be treated the same? Tht is, if I'm a suspect of some crime, I shouldn't be treated differently than someone of a different race, culture, or religion. Will be interesting to see what happens with all this. Meanwhile, understandably, the local area (& Virginia Beach is close by) is very disturbed about this senseless crime. 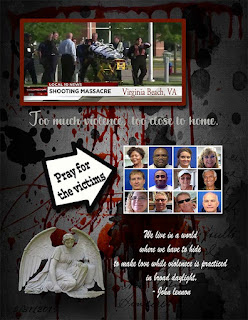 Watching news updates, I did not get back to current digital project but have for you a PU zip of elements and a paper for your color stash. Fittingly, today's zip is Color Pops - Black: 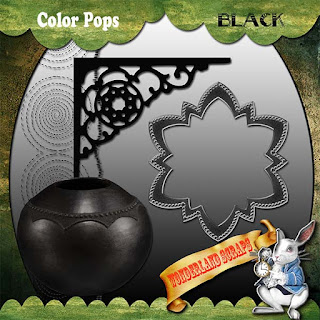