Some prompts for my journaling & other writing friends

I promised I'd bring back my prompts so here we go again. Remember, some of these are aimed at those who journal and others at those who write fiction. However, there's every reason for you to try any and all that appeal to you.

1) If I could do it over . . .
2) make a notebook entry on an early childhood event that made you cry or terrified you, or that made you weak with shame or triumphant with revenge. [Journalers might want to stop here.]
Then write a story about that event. Take us back to those traumatic times, relive them for us in such a way as to make your experience ours.
3) I am made of you . . . [Hmm, sounds like a good one for a Valentines' Day message, doesn't it?]
4) Freewrite for 10 mins from this prompt: Spilled milk
5) When the phone rings . . .
That's it for this week. If you'd like to share your responses, please do so.
Posted by SherryD at 8:41 PM No comments:

Something for you for free 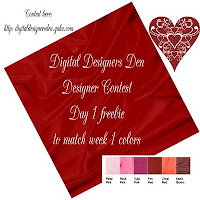 We're having a contest for want-to-be designers. Please follow the link in the ad below for full information. Even if you don't want to be a designer, you will want to check in and sample the kits those in the contest will be creating. That's right, the kits the contestants create will be offered for free to all so you have a chance to sample each person's work and then vote for your weekly favorite. Designers already with Digital Designers Den will also be creating some freebies in the color swatch and theme of the week, so watch for those too. 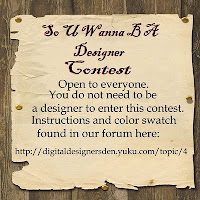 Here's a paper for you in the colors of the first swatch: 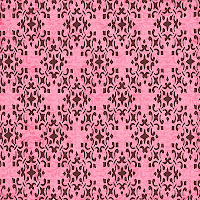 My entry for Art Creations Friday's 58th challenge to use the vintage image from Vintage Graphics and background provided. I used extracted the little girl, colored her, added roses to her hat and a teapot made from a paper in my True Blue kit.

Posted by SherryD at 4:43 PM No comments:

New Year's Day I found in my mail box an ad for Ashalee Wall's The Fulfilled Soul - a visual journal project. It seemed meant to be as I've wanted to do a visual journal but kept putting it off. I signed up immediately. We are setting monthly goals, doing daily positive affirmations, journaling about our lives and discovering more about ourselves. Here is my goal sheet for January: 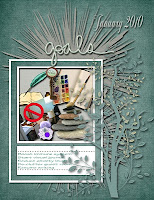 On New Year's Day I came across a blog with a preview for a free Alice In Wonderland tagger kit: 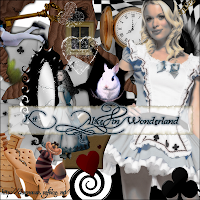 blog is here: http://charnovan.vefblog.net/
and had to play with it, thinking I'd make an ATC or 2. I made quite a few! 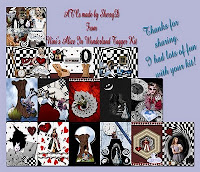 Thank you Nini-cat!
Here are a couple up close:

Finding Purpose Beyond Our Pain: a review

Finding Purpose Beyond Our Pain by Paul Meier and David L. Henderson
http://www.thomasnelson.com/consumer/product_detail.asp?sku=0785229221&title=Finding_Purpose_Beyond_Our_Pain

Doctors Meier and Henderson,two Christian therapists thoroughly integrate Biblical scripture into their guidelines for coping with seven common sources of pain. Meier and Henderson take as their premise that God has a message or lesson for us on the other side of painful experiences. They discuss the seven common sources of pain in separate chapters, using Biblical scripture to illustrate the lesson to be learned. Further, they identify three reasons they believe we have difficulty coping with pain and receiving the lesson.

Each chapter ends with a nice summation and practical application tips. Wrapping up their discussion, the authors offer a fitness inventory giving the reader the opportunity to evaluate their spiritual fitness or readiness for coping with the next painful experience that comes their way. In painful times, we all forget what we know, that God is always with us and wants only what is best for us. Having a book such as this on hand at such times can serve to quick remind us of His love and put at our fingertips a means of coping with and understanding our pain
Posted by SherryD at 12:51 AM No comments: 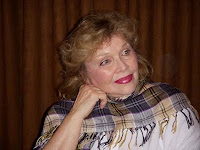 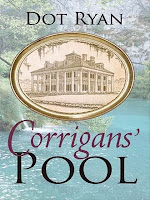 The synopsis on the back of Corrigan's Pool is brilliantly written and hooked me right away. Could the novel live up to its promise, I wondered? I had to find out. I'm a native Virginian, also known as a Southerner, and have a natural interest in tales of the Old South. This historical novel, set in Savannah, Georgia during the years 1861 - 1864 promised to be as vivid and entertaining as Gone With The Wind. Who could resist?

Some might say that it's too familiar, stories of the Old South filled with beautiful plantations, idle rich supported by slaves, fancy dresses, and summer romances. What could give such stories new life? What I immediately noticed was the way the story flowed smoothly, the attention to telling details in both scenery and characterization. Mrs. Ryan drew me into her fictional world quickly, effortlessly, and I had difficulty putting the book down.

The story centers around Ella Corrigan, the eldest daughter of a plantation owner who is overwhelmed with guilt over an accident he believes he caused to his wife. Driven to drink as his wife lies in bed with brain damage, Adam Corrigan leaves Ella to run the plantation and care for her younger sister, Honor. Granted, Ella has help in the form of loyal family slaves but it's a lot of responsibility for a young woman. For the most part, Ella is resigned to her lot, has put aside the usual preoccupations with love and marriage and has shouldered her responsibilities with grace. Ryan creates a fine portrait of her as a young woman who has moved beyond the frivolous life so many of her cohorts are leading. She's strong, brave, kind, and has a mind of her own. As family matters continue to deteriorate and war is immanent, Ella's father suggests she marry Victor Faircloth, an older man, a neighbor who has been trying to win her hand for some time. Mr. Corrigan is hoping that marriage to Faircloth will insure his daughter is taken care of and the plantation retained. Even though Ella does not expect to fall in love and marry, she is adamant that she will not marry for convenience. Besides, she finds something chilling about Faircloth.

Someone should have warned Ella never to say never. Unexpectedly, she has a chance meeting, at the beautiful pond on her property, with a rough looking frontiersman, Gentry Garland. Garland seems the antithesis of everything Ella would want in a man, so she is ashamed by her instant attraction to him and covers it with a strong dislike for him. The handling of the developing relationship between Garland and Ella is well done. When Garland abruptly disappears after pledging his love for Ella, the reader's heart is sure to break with hers.

Ella is not a stagnant character and the loss of her lover compounded by other family issues and war negatively affect her. The beautiful twist is that out of her own pain, Ella, marrying Faircloth in desperation, becomes more observant of pain in the lives of others. In particular, living on Faircloth's plantation, Ella learns why his slaves keep disappearing and how this is connected to the beautiful pond on her own plantation. Much as she regrets the loss of the beautiful life in Savannah pre war, Ella learns to question the foundation of that life. Ella's heartbreak has as reward a growth of her character and a willingness to risk her own safety to help others.

Carefully woven together, in Corrigan's Pool, the reader will find the romance of Ella and Gentry Garland, a tale of Georgians dealing with war on their doorsteps, a mystery involving the beautiful Corrigan's Pond, tales of human vice and treachery, and issues of human slavery. Ryan's attention to historical detail, lyrical flow of words, and understanding of matters of the human heart make this a must read. I've bookmarked her blog: http://www.dotryanbooks.com/ and look forward to her sequel.
Posted by SherryD at 2:03 PM No comments: