The meds seem to be working! Swelling is down and pain a little less.

Peacocks are often used in expressions of distaste such as:
If you describe someone, especially a man, as a peacock, you mean that they are arrogant or like dressing or behaving in a way that draws attention to themselves.
The metaphor she is a peacock means:
Having a very high opinion of oneself, filled with or showing excessive self-esteem. For example, She strutted about in her new outfit, proud as a peacock . This simile alludes to the male peacock, with its colorful tail that can be expanded like a fan, which has long symbolized vanity and pride.
The peacock is a showy bird, with its bright colors and beautiful tail feathers. It struts around, flashing those feathers to attract the females. Thus, its not hard to imagine that a person with the personality traits of a peacock is someone who adores attention.


Facts:
Peacocks are large, colorful pheasants (typically blue and green) known for their iridescent tails. These tail feathers, or coverts, spread out in a distinctive train that is more than 60 percent of the bird's total body length and boast colorful "eye" markings of blue, gold, red, and other hues. The iridescent plumage of the peacock originates in the fine side branches of the feathers. They absorb light of certain wavelengths, or disperse the reflected light, and so contribute to the color of the plumage. Why do peacocks have 'eyes' on their feathers? Charles Darwin ventured that the magnificent trains on male peacocks, which feature ornamental eyespots called ocelli, evolved because of sexual selection. He speculated that there was a single origin, which sexual selection then enhanced.

Occasionally, peafowl appear with white plumage. Although albino peafowl do exist, this is quite rare, and almost all white peafowl are not albinos; they have a genetic condition called leucism, which causes pigment cells to fail to migrate from the neural crest during development.
White peacocks, generally a mutation of the common Indian blue, are worth a pretty penny. A mythical mutation of peacock, which is now very much alive through careful breeding, is pulling in big bucks for plucky breeders who earn up to $1,000 per bird in some states 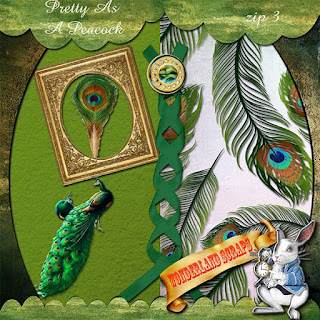 Pretty as a Peacock freebie

Spent much of yesterday at doctor's office, pharmacy and so on. Also "enjoying" a lie down with ice pack. Now on more prednisone as there was actual swelling in neck and just today got the muscle relaxers I need. If not better by Monday I'm to call and be scheduled for an MRI. On the plus side I got a chance to tell doctor about problems I've been having with left side of my body which my nurse friend is afraid might be early Parkinson's. The doctor said not to worry (yet) as there are a number of other things that might be going on. I'm sure I want none of them. The office is scheduling a visit to my neurological group (a father and sons group of highly educated and very intelligent & kind gentlemen of Indian descent.) for an evaluation. And all of that is to tell you why Thursday post is now Friday's.

I thought I'd start today with some general facts about our subject, peacocks.
Did you know?
The actual name of the peacock is peafowl. The term peacock denotes a male bird and the female is called a peahen.
There are two familiar peacock species. The blue peacock lives in India and Sri Lanka, while the green peacock is found in Java and Myanmar (Burma). A more distinct and little-known species, the Congo peacock, inhabits African rain forests. The peacock population is dwindling fast due to habitat loss, contamination of food sources and poaching. The Indian Peafowl is endangered and the Green Peafowl is nearly, if not absolutely, extinct. 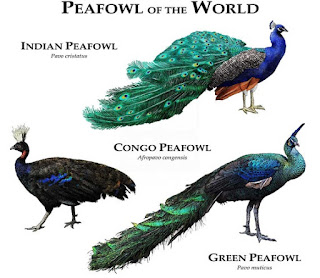 They are one of the largest flying birds. Their length (including tail) can reach 5 feet. Few people get a chance to see these birds off a ground, but they can, indeed, fly. Though usually peacocks do that in case of danger, rather than pleasure. Despite their giant tail feathers peacocks are able to fly, though they do not fly very far. When in danger, peacocks fly up into trees.

Peacocks are ground-feeders that eat insects, plants, and small creatures.
How much do they weigh?
Indian peafowl: 8.8 – 13 lbs Green peafowl: 8.5 – 11 lbs Congo peafowl: ?

Lifespan: Indian peafowl: 10 – 25 years Info on others not found. 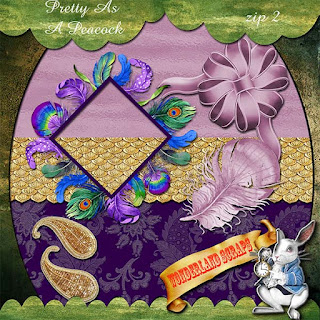 Real peacocks don't come in purple but this color seems to be a favorite to combine with the peacock's blues and greens, especially for wedding parties using a peacock theme, so I thought I'd include a little.

Back with new free kit, Pretty As A Peacock

Short post because I am suffering with a pinched cervical nerve. Much to tell you about but that will be later. Right now I have zip one of Pretty As A Peacock for you. (Later I'll just say Pretty Peacock.) 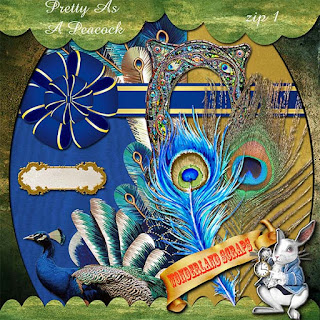 Today is the last of Summer Gardens. Another 3 quick pages. 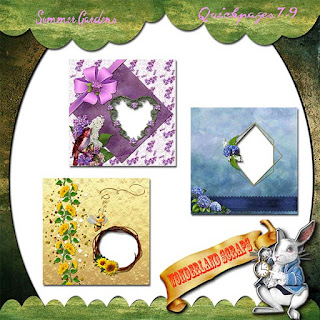 There will be a delay before the next free series begins. We have family business and activities that will prevent me from posting until 7/18.
Posted by SherryD at 10:00 AM 1 comment:

23rd anniversary for me & freebie for you

Today is my 23rd wedding anniversary. 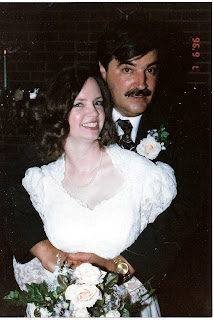 How pale I look in that photo! Still, pale or not, so much better than now lol. We are going out to dinner at Joe's Crab Shack and are busy planning a little vacation for near future.

Got my antique needle holder in the mail. Unfortunately, it will not be usable on my chatelaine because the top fits too loosely. So I'm still searching for one to add to it. Did find some of the rings used to make the outer chains and those are on the way.

Today your freebie is more qps: 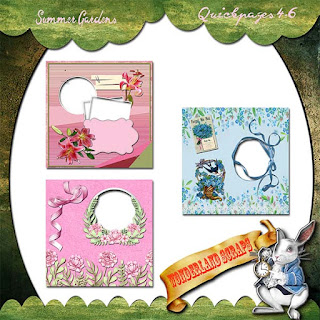 Have started work on what I think will be next kit. Fingers crissed.
Posted by SherryD at 1:25 PM 4 comments:

In the 90s here today but feels much hotter. Hope you are having nice weather for your holiday celebration. We are having a nice quiet indoor "barbeque": fresh corn on the cob,hamburgers and such.

Today I have the first of the quickpages for you: 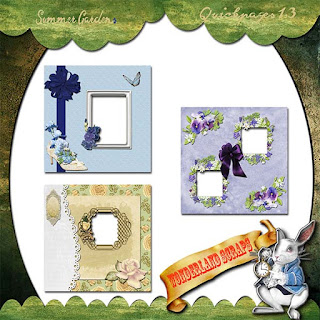 I'm still on some sewing related quests. Won an auction for a bone needle case for my chatelaine. Have a crazy bid on a mother-of-pearl needle book. Probably won't win it and will save my money. Can't believe I made that bid! Thinking of chatelaines, I came across photos of two antique Chinese chatelaines. Not for sewing. They were for tools involved in the Opium Wars! 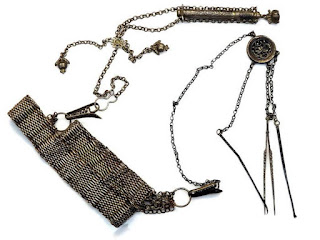 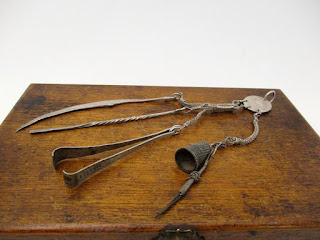 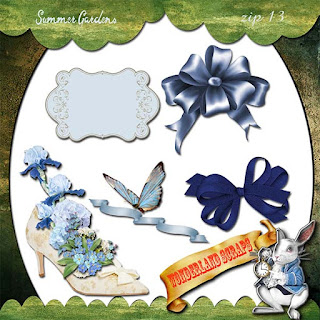 E-scape & Scrap is celebrating an anniversary and hosting some challenges over at Just Art. So far, I've entered two. This first is a mini kit challenge from kakleid using her free mini kit, Potpourri: 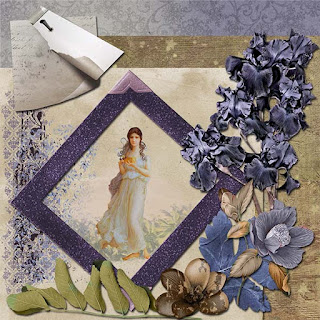 The second challenge is to use a template by Karen (kakleid) with any kit sold by E-scape & Scrap. I used a kit by Lavendar Designs called Art & Vision: 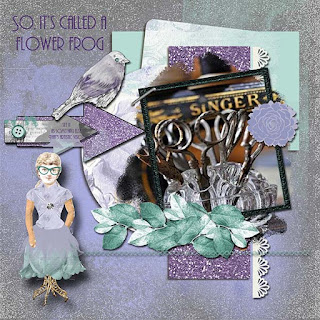 3 more challenges to go and lots of good sales, including some $1.00 kits from G&T Designs, a favorite of mine.
Posted by SherryD at 2:03 PM 1 comment: