Just back from running errands and have potatoes cooking for potato salad. It's in the 80s today and humid. Summer is coming on! Had some excitement late last night but have idea what it was about. It was 11:30 or so and we were watching TV while I worked on Larkin's blanket. Hubby commented that there was a police car right outside and hoped my car hadn't been hit again. We hadn't heard anything but with TV and AC on, it was possible. We are on a main street and have had trouble with drunk drivers and such before. Of course, we were dressed in PJs so not suitable for going out. I walked to the door and looked out to see if maybe an officer was headed to the door. No, but the car was sitting there, lights flashing, in the misty rain. Then I spotted something further past - a motorized wheelchair, barely moving with what appeared to be an elderly person. Maybe, I mused, the police were concerned about the person's safety? When I closed the door and said this to my husband, who drove a city bus for 42 years, he said those wheelchairs often have trouble in the rain and maybe the battery had gotten wet and it was cutting off. Not much later, a second police car pulled up, behind my car. Heard the door open and one of the officers went over to talk to first car. Nothing much appeared to be happening but them sitting there flashing lights. A little while later some kind of city truck pulled up, nosing in as if it was going to come into our yard! At one point, looking out the window, I could no longer see the wheelchair but saw a couple officers standing by a pile of what appeared to be cloth - light colored with large dark stains. Blood, I wondered? From who or what? No one ever came to the door and eventually the cars and truck drove off, one by one. Very weird. Looked around when I went out today but all I saw was a pair of discarded blue latex gloves at the end of our driveway, about where the second police car had been. That was last night's mystery. 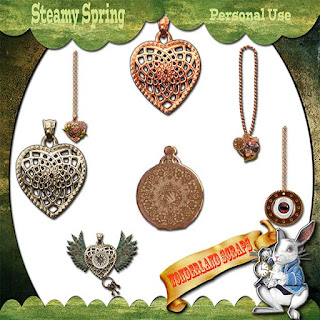 A little steampunk bling. Some pieces left large so you can play with adding gears etc to create your own.
Link:
https://dl.dropboxusercontent.com/u/57614067/2016%20freebies/SteamySpring/ws_SteamySpring_20.zip
Posted by SherryD at 4:52 PM

These are beautiful !! Thank you :)