Spoke with my brother Saturday night. He was rejected by the Mayo Clinic! Really, they wrote saying they did not feel there was anything they could do for him! Meanwhile, he still has that headache, and has almost no feeling in his right leg. A visit to his doctor found another granuloma has developed around the pump implanted in his back. The last time this happened, it caused similar trouble blocking off nerves and the surgery was quite extensive. The trauma was so bad he was hospitalized for weeks, had to learn how to walk again and then waited weeks on inadequate pain control before a new pump could be installed. This time he was told they have to remove the pump and will not be replacing it because his body is fighting it's presence. Pain control will be a problem. Doctors want him to have surgery immediately but he cannot because while on a trip up north to see relatives his daughter-in-law took ill. She began bleeding severely from her uterus and had to be stabilized before they could send her back to North Carolina for surgery. Thom's wife is there now taking care of the grandchildren and until she gets back, his surgery must wait. I offered to fly to Florida to be with him so he could go ahead with his surgery but he says his wife should be home in about a week and he doesn't even have a surgery date yet. Of course, he wanted to be updated on Dad and I had only bad news to offer. Surely we are at the bottom of a cycle of negative events and things must start to improve? 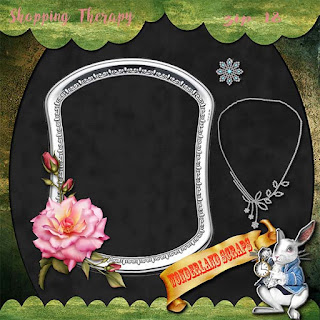 A velvet paper, large frame, some bling.
Link: https://www.dropbox.com/s/x5gvatfgjdhoaml/ws_ShoppingTherapy_18.zip?dl=0
Posted by SherryD at 10:00 AM