My mind is much relieved after talking to my brother last night. He said he didn't mean to make me think he was suicidal & is still hanging in there. Has appointment with the orthopedic surgeon next week when his wife should be home to go with him. Turns out the surgeon is also a specialist in strokes so Thom hopes he might be able to help him in that regard too.

I appreciate all the suggestions about dealing with shingles & responded to comments where they were left. I would suggest that anyone over 30 who has not done so yet go and get a shingles vaccine injection. At first, docs thought it would only be useful for those who never had shingles but they have since advised that even those who have had a bout get the vaccine because it can short circuit the progress of the disease when or if it pops up again.

Went to see Dad today, in a hopeful frame of mind because his audiologist was taking his hearing aid back to him. Unfortunately, he didn't know where the remote control for volume was and it isn't adjusted properly so he isn't hearing better. Had I known this while I was over there, I'd have done a search for it. He looked okay but still has edema in belly and a little in legs. Still on antibiotics for respiratory infection. Don't know if the antibiotic is causing him to slur his words or it's something else. Understood very little of what he was saying. At times he moved his mouth but no sound came out. Was he unable to tell he had no volume? Was his throat that clogged? I don't know. The most disturbing aspect of the visit was what appeared to be hallucinations. The first time, I was sitting in a chair with my back to the door and he said "Hello" while looking past me. I turned, thinking someone had come in but no one was there. He was nodding his head like he was listening to someone so I went over and sat on the bed next to him. I asked if he'd seen someone and he indicated yes, over by the wall. I carefully told him that there were only the two of us now and he mumbled something about the clock on the wall and went on to something else. Later he told me the sink was dripping. With the sun coming in the window it was hard to tell so I went over and checked. Not. Maybe 10 minutes later, he looked over towards the door and said, "What?" appeared to listen and said "OK, and knocked lightly on his bedside table. I let it pass and gave him something to drink. He wanted his Diet Coke and was fine drinking from the bottle at first, then I noticed the bottle was tipped as if it was going to pour onto his shoulder. Thought maybe he was drowsy and was going to take it out of his hand. He then raised the bottle to drink but his head was tilted left and he was aiming the bottle right. Not wanting him to soak himself in soda, I tried to correct it. He tried again and did the same. I smiled at him and took hold of the bottle and moved it to his mouth. Wonder if this sudden lack of coordination is symptom of another small stroke? Stopped at nurse's station on way out and reported all that happened. She will alert the later shift and they will keep checking on him. Could also be another UTI because when that happens we see more confusion. 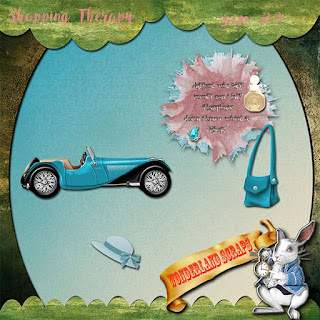 A car to get to the boutique in.
Link:https://www.dropbox.com/s/d3q2s5llk90adn2/ws_ShoppingTherapy_23.zip?dl=0