Monday freebie of The Irish Way

So much for good intentions! I'd said I had planned to give you two zips on St. Paddy's Day but only had the one finished and got that out late and into 3/18. I'd also said I'd have the second one to you Sunday but as you know, I didn't make it in time. Running behind. The zip I had mentioned about Ireland's religious traditions has become your Monday freebie. I've tried to give a nod to the major spiritual/religious items in Ireland's history (sorry, poorly written) and here's what is shown in zip. First, there are some standing stones, also known as Menhirs. These vertical stones were placed by Neolithic people and it is believed there was a spiritual intent. The Druids, a high ranking order of mystical priests is often connected with the standing stones so I have used them here to represent early pagan forms of spirituality. Next we have two of Ireland's patron saints: Patrick and Brigid. We've talked about Patrick before and most know for what he is revered. St. Brigid/Brigit/Brighid is less known except, perhaps, to Catholics. Her feast day is February 1st and her story is more complex than Patrick's. No writings exist from her time to serve as proof of her existence and background. She is thought to have been a former slave who found her vocation in caring for the poor. As such she is credited for having made crosses of reeds to give to the poor as she explained Christianity to them. Such crosses are made every year on her feast day and are still hung over the doorways of many Irish homes today and used to bless a household and its family and keep them safe from harm. Additionally she is said to have founded the first female religious order in Ireland and, as Abbess, started an art school famous for its illustrated manuscripts. However, there is ample evidence that Brigid is most likely a continuation of the earlier goddess Brigid/ Brigantia who was worshiped around the country and beyond. It was fairly common when converting pagans to Christianity to adapt some of their customs and beliefs to ease conversion. As such it is scarcely surprising to find that St. Brigid's feast day coincides with the pagan festival of Imbolc which was the start of Spring in the ancient Irish calendar. I've included a Celtic cross (the one with the circle) and a regular cross as well, a goblet, and finally, an angel meant to represent the famous Book of Kells, an incredible illustrated book of the Gospels. If you aren't familiar with the Book of Kells, you might want to try this link:
https://www.google.com/search?rlz=1C1CHWA_enUS603US603&biw=1920&bih=900&tbm=isch&sa=1&ei=XEevWoiyDuiA0wKnhoOwDg&q=book+of+kells+images&oq=book+of+ke&gs_l=psy-ab.1.5.0l10.2600.8459.0.12027.14.11.2.1.1.0.176.1531.0j11.11.0....0...1c.1.64.psy-ab..0.14.1546...0i67k1j0i24k1.0.HfzNvF2QAmQ
That's the Google result for Book of Kells images which will give you an idea of its splender. 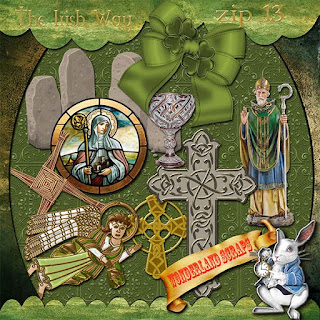 Many thanks for all the lovely comments on this series.
Posted by SherryD at 11:30 AM