Freebie - one for the lads

Today The Irish Way becomes a little more masculine. Included in this zip you will find a rough sketch (from an action) of a Celtic hunter. Yes, Irish men sometimes wear kilts too - not just Scots. The man needs his trusty dog, an Irish setter, and no doubt has a dirk (knife) tucked in his gear somewhere. Perhaps he will encounter a wolf. In Celtic mythology many tribes claimed to be descended from wolves and considered them sacred. Rather than see wolves as threats to their hunting, Celts believed them to be guides and helpers. In Celtic astrology, wolves are treated much like dogs in that both are considered to be fearless, brave, loyal, and powerful warriors who don't back down. Also included are the boar and stag. Either might be hunter's prey but they are also strong Celtic symbols. The wild boar is fearsome, dangerous, stubborn, and their meat was prized by the Celts. So prized that if you were served boar meat as a guest, it meant you were highly honored. Boars could symbolize war and chaos and sometimes their likeness adorned war helmets. Additionally, because of their mating habits, boars were a symbol of fertility. The majestic stag, represents the masculine side of nature. It is the totem animal for the antlered deity Cernunnos, who was the protector of nature, animals, and water. Because the antlers are shed and regenerated every year, they represent the tree of life and are symbolic of spiritual regeneration, abundance, and prosperity. You will find both animals appearing in many Celtic stories and legends. Finally, there is a representation of Cu Chulainn and his hounds. Cu Chulainn is a mythological hero who appears in the Ulster Cycle stories. Read this to learn more:
http://www.ancient-origins.net/myths-legends/irish-story-and-legend-cu-chulainn-002150/page/0/1 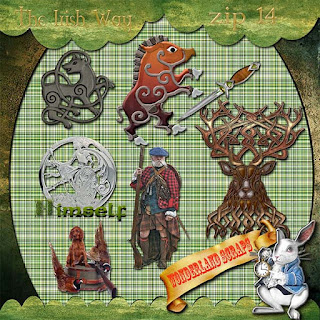 Hoping you are not in the path of Winter Storm Toby. We've been told to expect rain and/or snow here. I suspect it will just be rain for us. Stay safe and warm.
Posted by SherryD at 11:51 PM