About a week later, he picked her up to go to dinner. On the drive to the restaurant, she thought he seemed cool and distant and she wondered if he was about to say goodbye. Conversation just wasn't flowing as naturally as it had in the past, so while they sat sipping wine and waiting for dinner, she decided to ask what was going on. What? he asked looking befuddled. Something is wrong. Are you trying to find a way to tell me you don't want to see me any more? Because . . . . Before she could say another word, he reached for her hand, looked directly into her eyes and said, Nothing could be further from the truth. But there is something on my mind.
When she encouraged him to talk, she learned that he was struggling with a decision about a career move. When he'd completed his training as a clinical psychologist, he'd taken the first job that came along in his field. He had a lot of loans to pay back and thought it the best decision at the time. But he wasn't really happy working for a state run program for addicts. He felt the majority of the patients he saw were there because therapy was required for them to receive methadone to replace the street drugs they had become addicted to. I want to work with people who will sincerely work to improve their issues, he explained. He had just received a couple job offers and was trying to decide what he wanted to do.
Talking over the pros and cons of the offers, he realized he did not want to take the one out of state. While the working conditions and positions were about equal, the one out of state would pay better. But money wasn't the main concern for him; he realized he didn't care about making less if he could remain in the city and have her company. 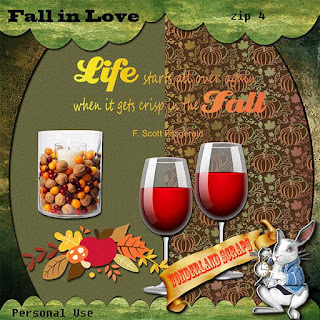 Going out of town on Wednesday (today) so not sure if I will be able to post or not.
Posted by SherryD at 12:44 AM

Love the spoon theory. Good to see a post today, hope you did not have to borrow from the next days supply.

New title for you: Desinger (by day) and Story Teller (by night). You are very good at both vocations.

Thank you for the Fall In Love series.